To answer a few questions from the comments- am I closer to Pasadena? We moved a whopping 1 mile further east so no, we're further now (thanks Levon!). Where in Riverside? We live nearby UCR, right at the base of Sugarloaf mountain. And I already felt like a true grown up when our daughter was born. Despite the fact that I was already 30, I felt like I went from kid to adult in one day. I guess responsibility can do that to you.

Speaking of responcibilities, I'll be taking a break from posting in here. I'm taking a much needed break from the internet. There's too many web sites I check daily, too many forums I read on and too many distractions. I'm going to be hibernating in the studio for the next 2 months. I have been so busy with things (moving, birthdays, various art projects, taxes, internet difficulties, travelling, blah blah) that sadly I haven't had much time to just sit and make art.

So I'll be doing just that for awhile. I cleared out most of my ongoing projects, I'm going to let some things slide, and just disappear into my magical lab for a while. Time for experimentation, some soul searching and risk taking. It's time to let the phone ring, let the emails pile up, leave the computer off for weeks and get my hands dirty. Time to consume intense amounts of caffeine, listen to loud music and go to sleep each night just itching to wake up and feel the creative surge all over again. It's time to make some art.

I need to get away for a bit and do my thing. As my career grows sometimes I feel like I do more paperwork than artwork. That's just sad to me. I will still post in here from time to time with news but don't have the time to give this blog the love and pictures it deserves until December when things slow down. Thanks, I know everyone understands..

We're finishing our weekend of moving, so here's a short blog entry. We've been living in an apartment for four years now and have finally decided to rent a house. It's almost like there's too much space now, I think it's about 3x the square footage of the apartment. We don't know what to do with all the extra room. Now we have a garage, a lawn, an avocado tree, a backyard for the baby, but the best is no more going up and down stairs! And it's quiet, super quiet at night, no one coming and going at all hours, just crickets and sometimes coyotes. They woke me up at 4am and I had a smile on my face because I like their high pitched yelps and barks. I looked out the window, looking east and the moon was out, stars were bright and just at that moment a shooting star flew by. What are the chances? Okay, I need to get back to work. Boxes to unpack, furniture to put back together and still have to clean the old apartment and try to get some of the deposit back...
-Jeff
Posted by Jeff Soto at 12:40 PM 8 comments: 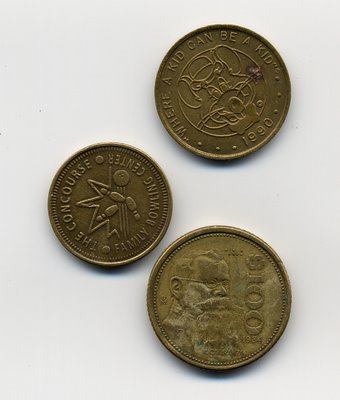 Went to the supermarket today to use one of those Coinstar machines. You know, the ones where you put all your loose change in. We're moving out in a few days and I thought it's about time to get rid of the two jars of change we have sitting here. One of the jars has been filled up for about 8 years, and I'm pretty sure some of that change is from when I was a kid.

So at the Coinstar machine, when it tries to process a coin and it's not U.S., it spits it out. I thought this was the coolest part, seeing all the weird coins and objects that get rejected.

I found a Chucky Cheese coin, no idea where it came from. Says it's from 1990 but I haven't been there since the 80's. There was a Concourse Bowling Alley coin- I remember oing there with my brothers about 5 years ago. I also found this thick coin that said $100, and I got all excited for a sec but I think it's actually 100 pesos. Cool looking coin though.. 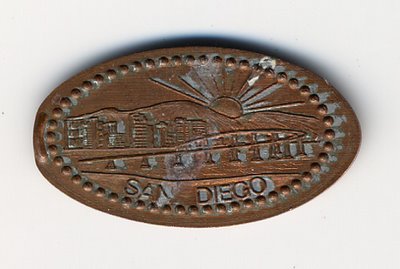 Found this San Diego penny. It's from one of those machines that smashes a penny (that you provide) for a couple bucks. I think it's from when me and my brother Jesse stayed on Coronado Island with my Aunt Debbie and cousin Amber. 89 or 90 I think. 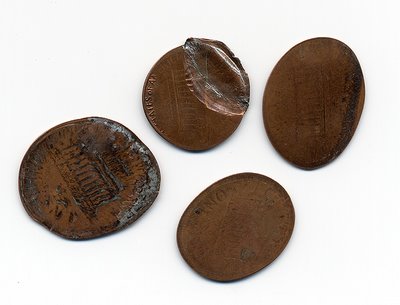 Speaking of smashed pennies, check these out. I'm sure many of you have made these, they're flattened by trains. You just lay out a bunch of pennies on the tracks and wait for a train to come by then desperately try to find the coins which will be scattered all over. Dimes work real well too, they get thin as knife blades. Nickels and quarters don't work as well but they're thick enough that you can hear then getting run over. That penny with the half circle notch was from overlapping 5 or so pennies. We were hoping they'd fuse together or some shite but it didn't happen. 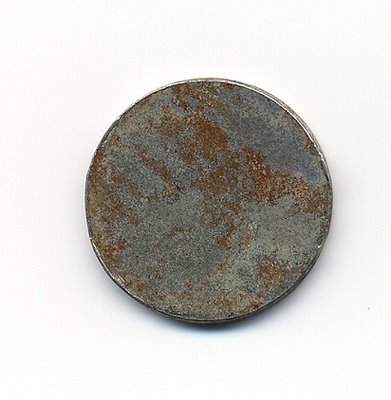 Then I found a weird coin that looked strangely familiar. I remembered what it was as I flipped it in my hand. When I was 10 I had this notion that I could flatten out nickels and make them into quarters. Turn 5 cents in 25. I spent a day smashing and shaping nickels, trying to get them the same circumference as quarters. I was going to use them in vending machines. I don't think it worked but this is one of the nickels that somehow over the years has stuck around. And it's actually pretty close in shape to a quarter.

Last I found these rejected "jems". A washer, a gear, a bead. And my old Target pin. It used to be white and red but it looks kinda cool as it has aged. It reminded me of how much I take for granted these days and how hard I've worked to get where I'm at. Pushing shopping carts in 106 degree heat really blew, it was hard labor- we didn't have a Cartmaster 5000, we had to actually use our muscles. And very under appreciated (rarely a thank you for my hard work), but I still took pride in my work. I could have easily blown it off and said the hell with it but for some reason I tried hard to do my best. I guess I felt lucky to even have a job. I always try to think back to working out in the elements, daydreaming about the future while pushing unending lines of carts to waiting shoppers, carving a J+J in the tree by the Garden center, seeing my breath float up in the cold rainy nights. Life was simpler eight years ago. Not that I would ever want to go back in time but it's always good to look back and see what happened.

Okay, some art stuff- many people have been asking about the giclee I have coming out, called "Savior of Nature". I will have more info soon, I'm meeting with the printers tomorrow, and depending on how the first round of proofs look, I may do a preorder. I am working on pricing, it will be between $400-$500 and the edition is 50 prints + 3 AP's. I will know more tomorrow. We're moving soon so I might be out of touch the next few days, but I'll get the info out as soon as I can. Here is the giclee.... 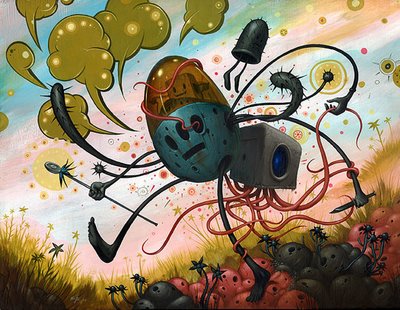 I have a new assistant/intern/apprentice- Aaron Mason. He's a tattoo artist working out of Soul Expressions in Temecula. He'll be helping out with all sorts of things in the studio, and hopefully I'll be able to pass on some art knowledge. 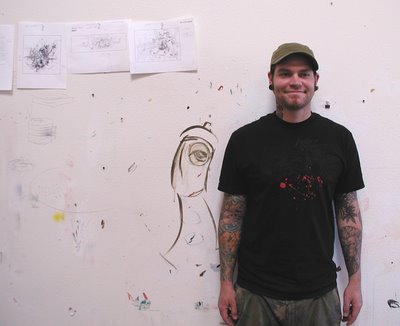 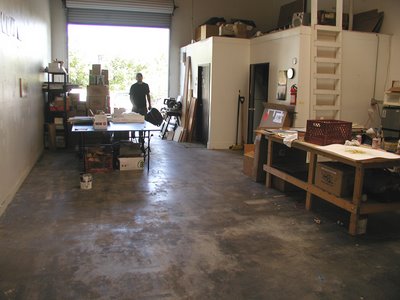 Aaron and I cleaned out the studio today, organized things a bit. I don't think it's been this cleaned up since I moved in last October. We were making some space for some canvases and panels that were being delivered today. 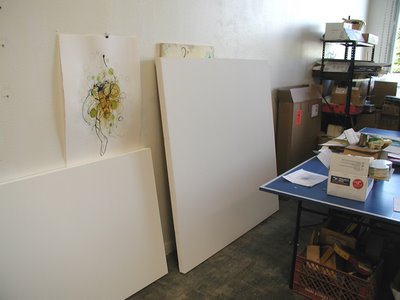 This is a 5' square canvas and to the left a huge 10' x 3' canvas. I decided for my upcoming show that I wanted to get all the panels professionally made. I called upon the craftsmen over at Lucius Hudson to build all the panels and canvasas. Once you are selling art for decent prices I think it's time to step up and give the collectors the best quality possible. No more warped plywood and Aaron bros. canvases for me. 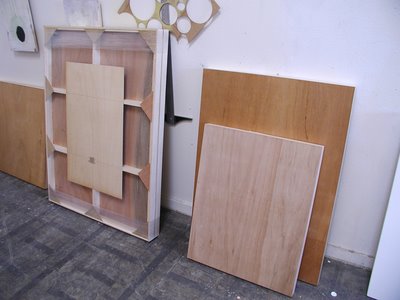 These are some of the wood panels. Check out how they're constructed. Super sturdy and razor straight. 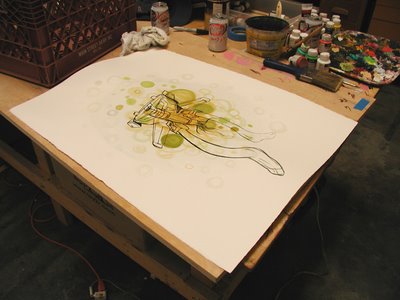 This is a work in progress on Arches paper. Having fun working on paper... 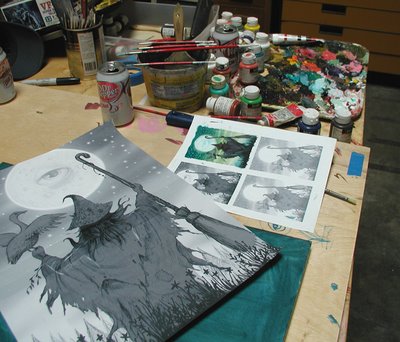 I still take on the occassional illustration job, though they're getting rarer and rarer. This is a book cover that I'm working on, very different from my gallery work- more fantasy /sci-fi, it's a lot of fun for the dork deep inside me. That's my actual sized sketch and tiny color comp. This job is late and I need to finish it soon. 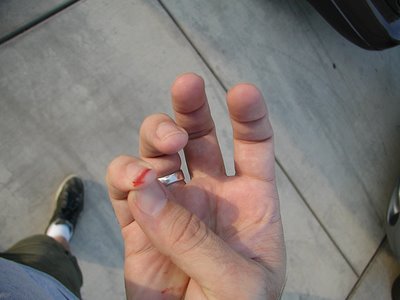 Ah shit a paper cut. Except it's from a cardboard box which slices deeper. Right under my pinky nail. Stings. We are moving soon, and I'm starting to hate cardboard boxes.
Posted by Jeff Soto at 4:43 PM 11 comments: 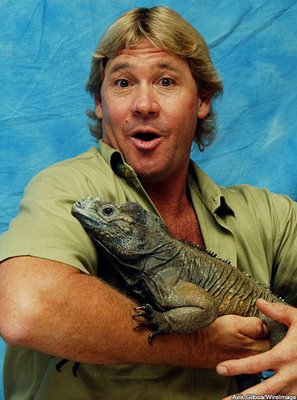 Noooooo!
Steve Irwin "The Crocodile Hunter" has died! I was always amazed at how that guy had never been maimed by the crocs or bitten by a rattler, looks like he was done in by a stingray. News reports say he was pierced through the chest by the stinger. I imagine there's potent poison in Australian stingrays. Guess he died doing what he loved...
Posted by Jeff Soto at 10:35 PM 9 comments: