Here's a preview clip of my show from Analog Color. Thanks Jeremy and Nick!

Jeff Soto: Turning in Circles at the Riverside Art Museum 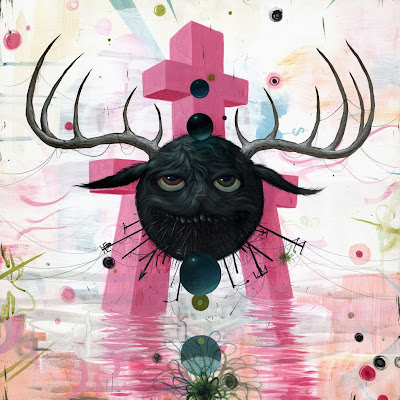 This is the solo project I've been working on and not returning phone calls for. Come by if you have a chance. The show opens to the public on December 2nd but I will be in Miami for Art Basel. The actual public reception is Saturday December 13th, 6-9pm, I will be there and hope some of you can make it too. Most of the work is available through Kinsey/DesForges Gallery, contact jana@kinseydesforges.com for more info. Thanks!

On a side note, and probably of no interest to pretty much anyone reading this haha, I recently found out that my texting was accidentally turned off my phone about a year and a half ago. I never used it and just thought no one was texting me. Well I was wrong and apparently missed the memo that texting is the new way everyone is communicating. I'm finding out many of my friends have sent me texts and wondered why I didn't respond. It's because I have not received any of them. The most current text message on my phone is from May 2007. Apologies to anyone waiting to hear back! I need to get things fixed...
Posted by Jeff Soto at 11:32 AM 7 comments:

I have a book signing this Saturday night at La Luz de Jesus in Los Angeles. They will have copies available of my newest book, "Storm Clouds". Come get a doodle in your book and say hi. Here is the info, hope to see you there: 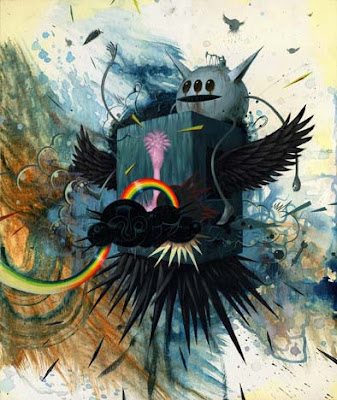 P.s. there is also a show that will be on display at La Luz from my friend P-Jay Fidler, "The Permutation Generator". Here's one of his pieces... 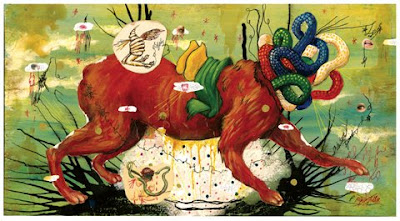 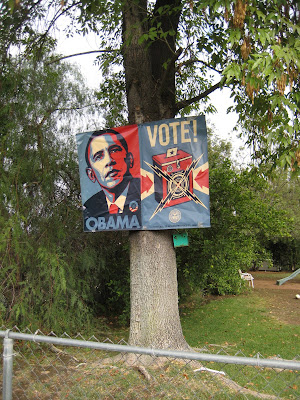 Here goes another election. It's Monday and who knows what will happen tomorrow. I'm rooting for Obama as you can see. He's in a good spot, but who knows what will happen. His supporters need to come out and actually vote! We put up some banners yesterday, I think Shepard's now iconic image looks a little odd surrounded by greenery, but it's very visible from the very busy street below. Derric and I also put up a larger banner on his place. Looks great from the street. 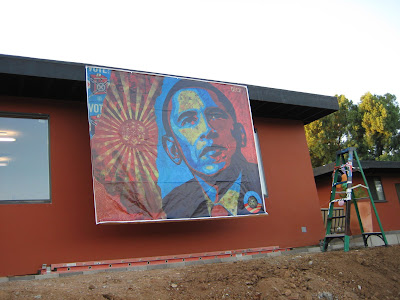 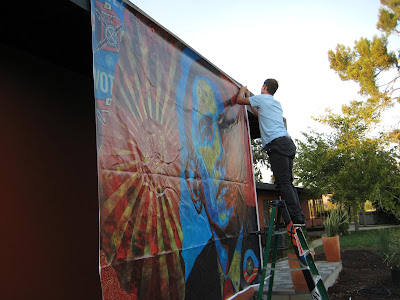 So I went down to vote early today at the Registrar of Voters in Moreno Valley. I have never seen turnout like this in an election! To my surprise the lines were long and the wait was 2 hours to vote. I saw many people leaving but most were staying and waiting. It seemed like those who were waiting around were either younger (possible first time voters) or minorities (African American, Hispanic). And there was a very positive air even though people were waiting for hours in the sun. I don't know if that makes much of a difference for Obama in little old Riverside County (since CA electorates are almost a given for Dems), but it could be seen as a sign of what's going on all over this country. Democratic voters are actually voting! Republicans ALWAYS vote. They will vote in small elections, the big ones, they will brave snow and rain, and they will vote well in advance so they don't have to worry about it on Election day. Democrats need to take note.

In any case, I had things to do today so I decided not to wait. Tomorrow I cast my vote, and I'll probably be waiting in a longer line but that's how it goes! I think the important thing is that we all have a vote and that's really the only way to exercise our opinions. Get out there and vote tomorrow!
Posted by Jeff Soto at 12:32 PM 3 comments: