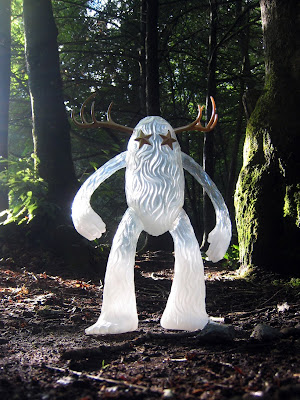 I will be at the San Diego Comicon this Friday and Saturday only. Come by the Hi Fructose booth (#4939) and check out all the in production work for The Seekers and the exclusive and super limited Ghost Seeker. There are 100 made of The Ghost Seeker, with only half of those available at the booth.

I'll be around to sign the new Volume 16 of Hi-Fructose, draw, chat, and share Comicon stories. Schedule below: 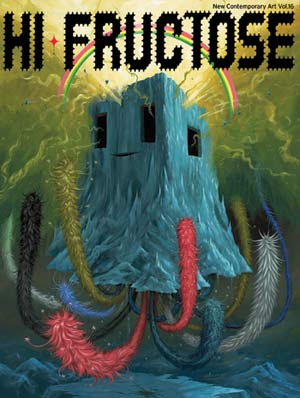 Also swing by the Murphy Books (booth #4833), I will have some prints available and it's the only place to pick up a copy of my Storm Clouds book. I don't have any set hours there but ask around, I might be stopping by from time to time. 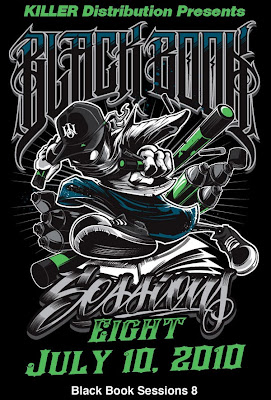 Myself along with a bunch of others will be painting Saturday in Ontario, CA as part of the Black Book Sessions event. Come check it out, it's supposed to go from 3-8pm. And if you're an artist between ages 9 and 25 there is an art competition. Here is some more info: www.blackbooksessions.org
Okay, gonna go dust off the old spraycans- some of these are very old! hahah... 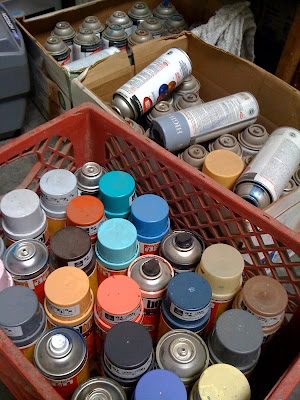 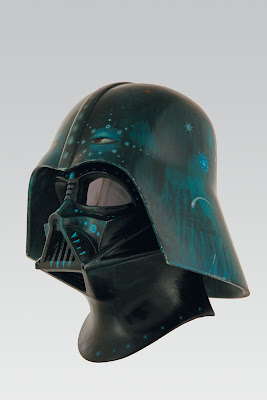 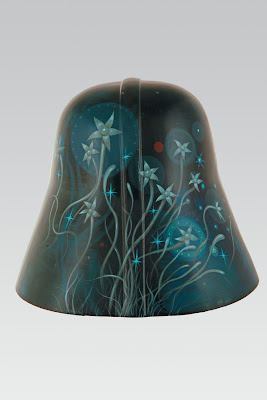 I have been so busy running around, painting and catching up (with just about everything), that I forgot to mention this. The Vader Project auction is tomorrow- Saturday, July 10th. Some pretty nice pieces in the collection, and there is a catalog that has been published that is very cool.

Some people have noticed that I've been releasing more screen prints than ever before. I haven't really planned it like this, but I've had some fun opportunities come my way and just went with it. It's been a nice and welcome change of pace from all the painting. Here's info on the two newest prints...

Pearl Jam, Arras France poster
This is an eight color screenprint that measures 18" x 24" and printed on creme colored archival paper. Signed and numbered edition of 100 will go on sale Tuesday July 13, around noon. $60 + shipping at Potatostamp.com. **I am in California= Pacific Standard Time** Scrap Yard Power Droid
This is a 7 color screenprint that measures 24" x 36". Signed and numbered edition of 50 will go on sale Tuesday July 20, around noon. $90 + shipping at Potatostamp.com. **I am in California= Pacific Standard Time** 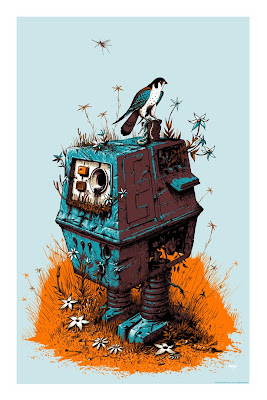 I had the opportunity to work on a Star Wars print with my friend Mitch, it was a double no-brainer, Star Wars and screenprinting! Yeah! Two things I love! I got to pick a moment or a character or a situation, and I ended up going with the Power Droid, also known as a Gonk Droid.

Star Wars was a pretty big deal for me as a kid. I was only 2 when the movie came out, and I can’t even remember if I saw it or not in the theater. The characters and story were known to many of us mainly from the toys! The toys! Oh they were wonderful, and we played with them for hours (and wore out the BEST and Sears catalogue)!

One of my favorite action figures was the Power Droid, and I didn’t really know much about the little guy, but for some reason he (I pictured it being male for some reason) captivated my imagination. I realized at some time that he’s barely even in the movie, which added to his mystique. Over the years he functioned as the worn out, floppy-legged power supply for numerous Transformers, GI Joe’s and Construx. He is small and cute, and found a place in my childhood heart. I still have the little guy. This piece is an ode to the Power Droid!

As usual, I did all the drawing by hand, and scanned everything into Photoshop. You can see some of the layers below. At 24" x 36", 350 dpi and 10 layers (while working on it), it was a pretty large file. 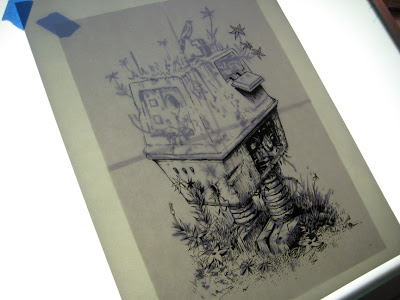 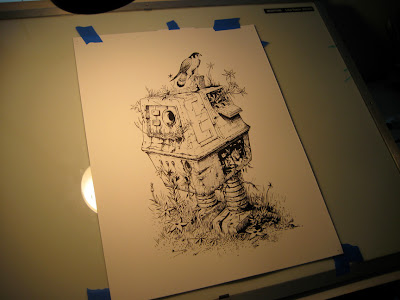 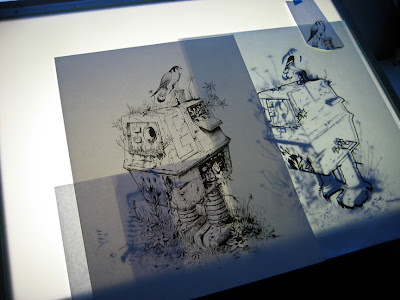 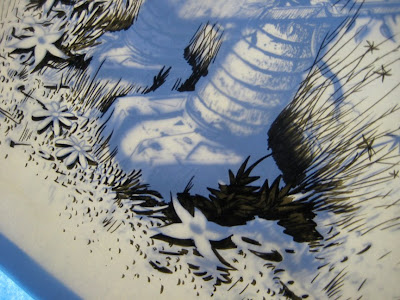 Here's the final- Scrap Yard Power Droid ended up as a 7 color screenprint that measures 24" x 36". I have some to sell, check back soon.... 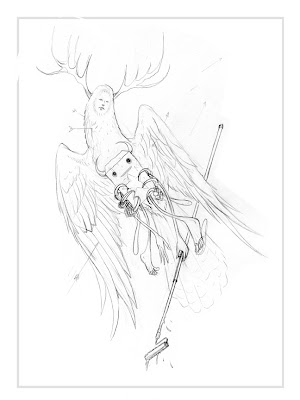 First I make a lot of sketches, and came up with one I thought worked (other ideas might be used in the future, so I don't want to show them just yet). Once I have a good design, I try to figure out how to layer the colors. I have to do this ahead of time, maybe because I am new to this but sometimes it gets so complex I can't figure out what layers should be over each other. I like to know how things are going to be screen printed. 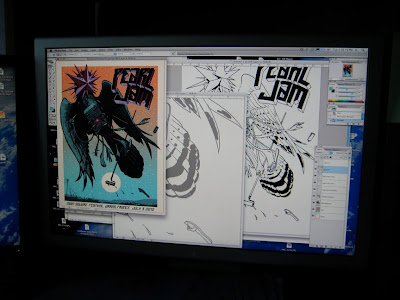 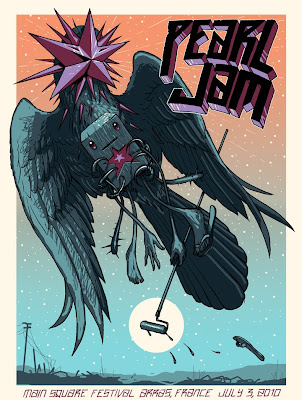 I use the computer to scan in all the sketches, and rough color all the layers (above). I take that layered rough color sketch, and print up an actual size drawing of the main line art (in this case 4 sheets taped together). Then I take that to my light table for inking. 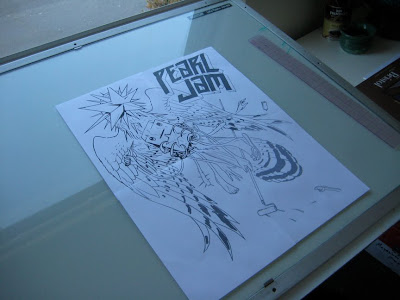 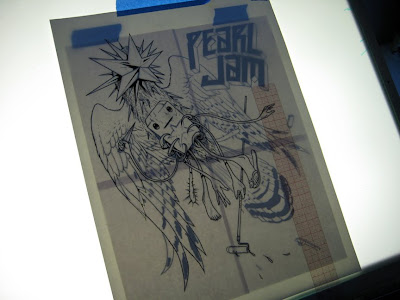 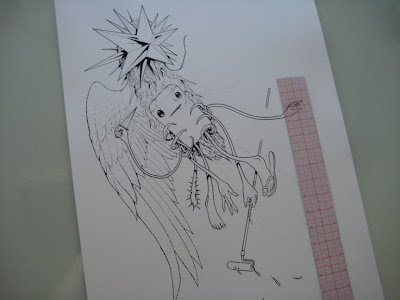 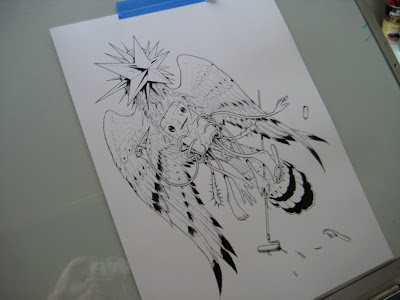 I worked on a new font called "Neon Boner", it is my first font I have created and was a real pain in the ass.... but I am happy with how it turned out. I did the type on a different piece of bristol in case I needed to reposition things. 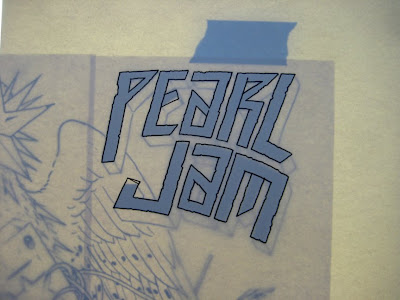 After the main linework and text was finished, I used them to trace for the other colors. Then everything is scanned into the computer (can be nightmarish sometimes!), and colors tweaked. I did 95% of this piece and all the layers by hand, which I have been told is the old fashioned way. That's fine by me, I like working the old fashioned way! I recently bought a Wacom but enjoy the actual drawing and inking so much that I don't see myself using it except for the tedious things I usually do with a mouse. But we will see...

The final is an eight color screenprint that measures 18" x 24" and printed on creme colored archival paper. I got them a while back and am very pleased! Screenprinting is getting a bit addictive, as the final prints have all been looking nicer than I expect.

I'm working with my friend and long time artistic collaborator Maxx242 on some upcoming secret projects. He just put up these Pearl Jam prints for sale. Check it out: 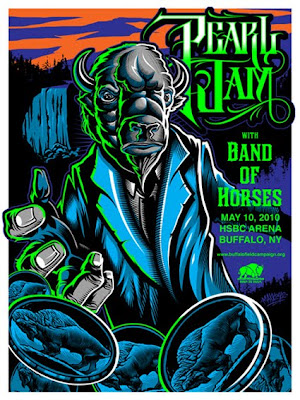 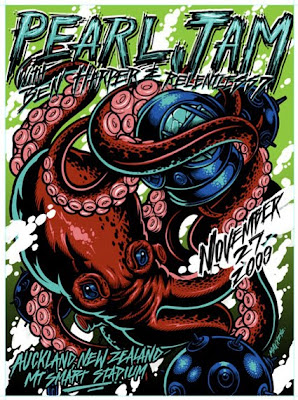 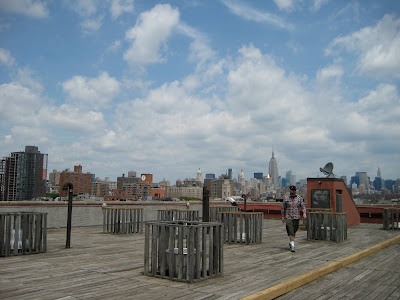 Thanks to EVERYONE that made this one of my best trips to NYC. I had a great time, ate (too) good, met nice people everywhere and even got to paint in the city.

Now I am catching up and decompressing, if you've been trying to contact me be patient, I am working on it. Stay tuned I have some fun things in the works...
Jeff
Posted by Jeff Soto at 1:43 PM 1 comment: