I love prints!
by Jeff Soto.

We had dinner at Shaunna and Mike’s place last night and I’m always amazed by their growing art collection. They just picked up a small Bwana Spoons piece that’s really cool. I should have taken a picture. They have some really nice prints framed (Sorren, Viner, etc) and I always think about getting some of our prints framed some day.

Prints are cheaper than buying an original so it always opens up the door to collecting artists you otherwise can’t afford. I buy and trade prints pretty often, my collection is growing but nothing is on display yet, mainly because in our apartment there’s not too much wallspace. Here are some from our collection... 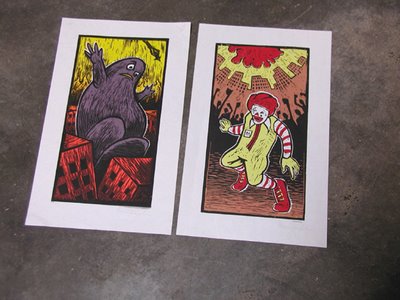 My first set of prints I bought. I don’t know anything about the artist but I believe they are wood cuts. I bought them from the Comicon in 1998 (I think), and wanted to meet the artist but everytime I came by he was off somewhere.. 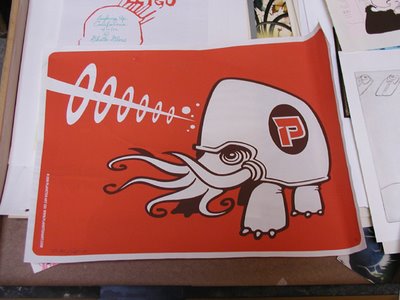 My next print was from Plankton Art Co., also known as the husband and wife duo Allen and Susan Crawford. I just thought it was a great print and bought it from “Tin Man Alley” the first time I made some money from my paintings. Later on in Philly I got to meet the Crawfords and they were really cool people, down with nature and all that. After the Plankton print I started trading and buying and collecting and now I have drawers of them. 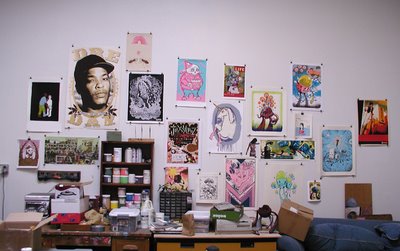 Here is my studio wall where I display some of my favorites. They should really be in flat files or in frames behind UV protected glass. I put up some of my own prints so I can look back and keep the new prints related in stye or color. L to R- Jeremy Fish screenprint, Sammy Harham screenprint, Kozyndan, Dre Day!, Ryan Jacob Smith screenprint, Mr. Cartoon screenprint, Biskup Juxtapoz print, Michael Sieban screenprint, my Pressure Printing piece, Ben Woodward unicorn, Shaunna Peterson giclee, Meathaus screenprint, some of my screenprints, a Caroline Hwang screenprint, and a Shepard Fairey screenprint.

I have tons of prints, I couldn’t show them all it’d be a long blog. Here’s some drawers. 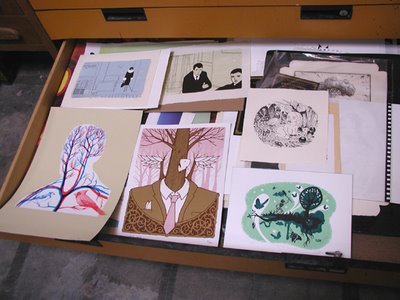 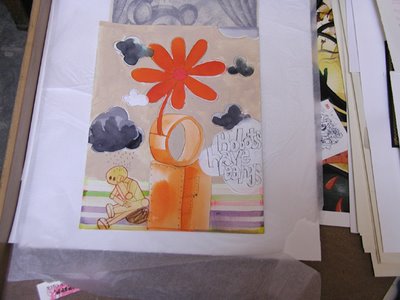 This one isn’t a print but an original from the Robots have Feelings Too show I curated. It’s in the flat file waiting for a frame. Painted by James Fish. 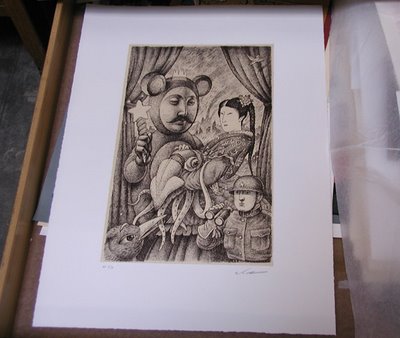 An Alex Gross etching. This is one of my favorite prints, will be framed for sure some day. His work was just in Juxtapoz an issue or two ago. I was kinda disappointed he didn’t get the cover, (no offense to Blane Fontana) this was the second time Alex has had a major article in Jux and not got the cover. I love the mag but c'mon guys. Ah well, maybe next time. 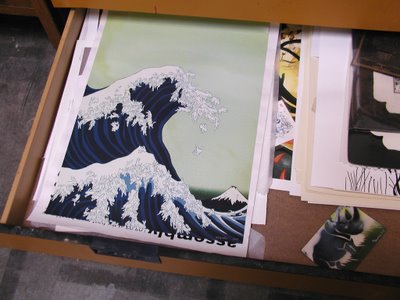 Kozyndan prints are always fun to look at and really examine for a while. Anyone know if they have a blog? I could see that being really interesting... 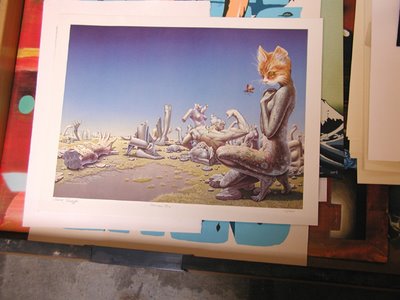 One of my biggest inspirations from my youth was the British artist/illustrator Patrick Woodroffe. Not my favorite piece from him, but I found this print on eBay pretty cheap and I was happy to have a signed piece. I wrote him a long letter a while back and though he replied back in person, he seemed super busy and didn’t answer any of my questions. I don’t wanna say he was rude, but he was very quick and to the point, and I wonder if he even read what I had to say. Oh well, usually people you hold up on a pedestal for so long turn out to be, well, normal human beings that are busy just like you and me. It’s all good, I understood where he was coming from. Still one of my favorite artists of all time. 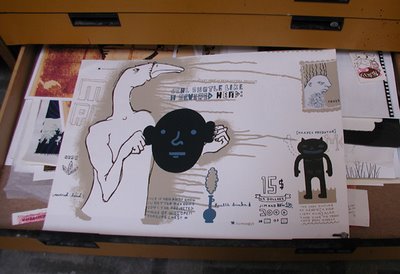 Ben Woodward and Jim Houser collaboration screenprint. Ben gave this to me when I visited Space 1026. 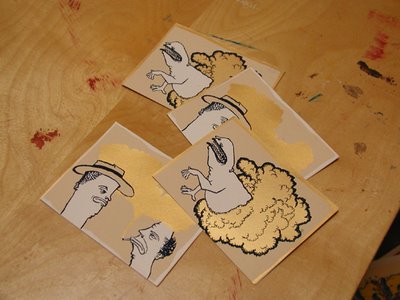 These were some postcards Ben screened by hand for a show at New Image Art back in 2001. Gold. 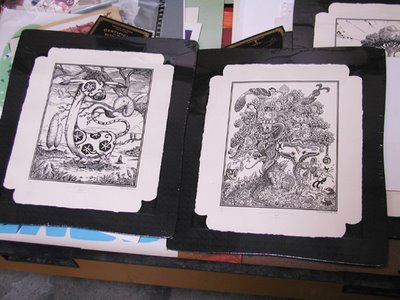 Some prints from Pressure Printing, Scott Musgrove and Jim Woodring. 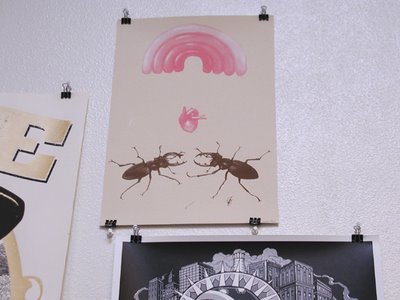 Ryan Jacob Smith prints. I loove this dude’s stuff. We went to school together and I wish he lived closer. I think, even though we paint very different and are working towards different artistic goals there is something that we share, maybe we just pull influences from similar sources (we both have old textbooks and Time Life books). 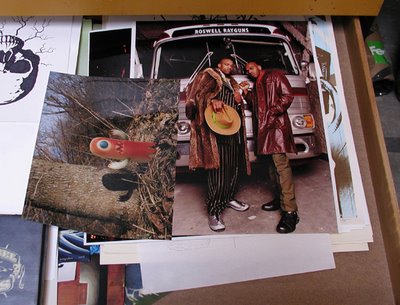 These are prints from Michael Wong a NY photographer who came out to shoot me. We did some trading. 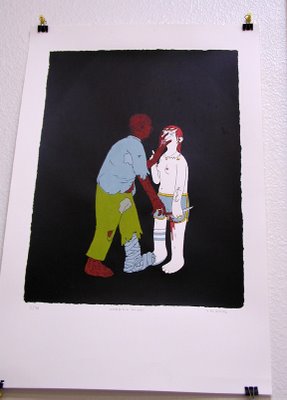 Sammy Harkham, artist and editor of Kramers Ergot made this beautiful print. It kinda freaks me out, it’s called “Wedding night”. There’s blood, sweat, urine, various bodily fluids apparent. I didn’t want to ask him what it was all about.

Here’s some stuff from the 2006 Comicon. Mark Todd with Skeletor, Unlovable by Esther Pearl Watson (those two have made frequent appearances in this blog..) and a Mars One litho. 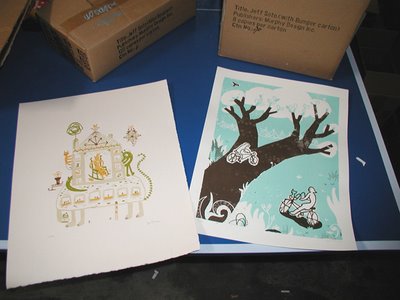 Some Souther Salazar prints. Really cool. He gave these to me when I visited last week. I need to repay the favor and hook him up with some of mine.

Yep, those are some of my prints. There are a lot more but I'm probably boring the readers as it is.
-Jeff

Thanks for all the support with the apparel situation. At this point I really think the only way to combat companies ripping off my designs is to start my own line. I'm hoping to start working on it after my BLK/MRKT show in November. I want to make quality products- shirts and probably just hats and sweatshirts at first. Keep it small you know, limited editions, see how things go. Maybe sell off Potato Stamp at first and then to smaller boutiques. I just want to keep some integrity to anything bearing my name so I want to do this right. Thanks!
Posted by Jeff Soto at 12:28 PM

Right now, I can only afford to buy prints. Do you feel that buying a limited-edition print is better than purchasing a poster? What makes it more valuable? Or does it?

it's always interesting to see what things people like to collect, esp. creative people!

I LOVE Prince, purple rain was my favorite album. Oh "PRINTS", yeah those are okay too.

Can you make shirts that say Gandolfini ate my baby?

Keep it movin pal, the blog is always a nice read.

Smivey- You should buy the prints you like, don't buy prints based on what you think their value might be someday. There's no way to really know, it depends on what the artist does in their career and how important 'their' art movement becomes. Generally, for the same artist, the signed and numbered limited edition prints should be worth more than an unsigned poster. With anything collectible you want a smaller amount out there in the world.

Josh- hey man, nice to see you in here!

Mr. letterman- It's cool actually, I've only paid for a few of our prints (um.. Caroline Hwang, Dre Day, Jeremy Fish, Shep, Plankton..) most I have traded my own prints or paintings for. So it's a good way to collect art for us without spending tons of money.

hey man, you also planning on registering, copyrighting, licensing (all that boring crap) too for Potato Stamp? probably be good to make it super legit so nobody can fuck with you.
also, you probably already know a good printer out there in Riverside, but if you don't, i work for a silkscreening company here in Detroit, they make some pretty decent stuff, do a lot of work for Niagara, Shag, Glenn Barr, and Me :) maybe i could help you out. drop me a line if you need some advice on quotes or anything so you don't get fucked over by shady companies.

Mmm, I would love to hear what kind of paper and ink and whatever do I have to ask for if I want to make a silkscreen or a print (I don´t even know if it´s the same) about one of my paintings. Can you Mr. Soto or The Chung help me?. Thank you.

not to stray of topic or anything but i jsut got my second soto tattoo done... everyone should check it out and let me know what u think...

go to my picture section

Hey...T-shirts sound great but I'd like to see something nicer and more long-term too, like a Jeff Soto jacket or something, or a silk tie in particular.

You know, maybe you should hook up with a big-name design house. I've seen black dudes in NYC wearing this gorgeous Fat Albert silk shirt...something like that but Sotoesque would be cool.

your work is unique and inspiring.

great to see some of your collection...those prints are beautiful.

Thanks for answering my question, Jeff. I didn't mean to imply that I was buying art as an investment. I just didn't want to be paying the extra money for a limited-edition print if it wasn't worth any more than a poster. Ideally, I'd like to own an original Maybe I'll save up my money and check out your next show in September.

Is that a prototype "walker" i see on your table there? Hummmmm. ;)

hi jeff, i love your work and thanks for the work it took to put (some of) your collection up. will there be a public reception for your show in nov? i contacted the gallery but no response. thanks in advance if you answer this ? (i would also love a gandolfini ate my baby tshirt!!!)

Does anyone have advice as to the best way/place to get prints made? Also, I work in Illustrator and Freehand, so all my work is in digital format, is there any point making a print of something that came from a computer (well, from my head via a computer)? Wouldn't that just be a poster? Not knocking posters - posters are solid - word...

Blogity blog, sweet.. found u on My Space, please bring a show to Australia Jeff.... would LOVE to see your work up close,,, I so could eat a bowl of your pink sparkely sparkels on the Snowmaker Octopus work,,,they are a simply delicious touch!!!

are you going to ever make t shirts or hoodies?

hello, i see you have a walker proto sitting on the desk. do you happen to have that for sale?